Open Menu
« Back to the magazine 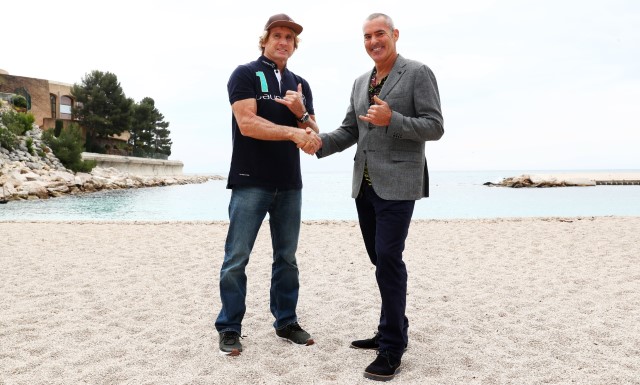 He is known for tackling the most challenging waves in the world, and today Garrett McNamara has announced his intention to use sport to help young people overcome discrimination and disadvantage as a Laureus Ambassador.

The Hawaiian surfer was welcomed into the Laureus Family by Laureus Academy Member and windsurfing legend Robby Naish on the beach in Monte Carlo, the host city for last week’s 2017 Laureus World Sports Awards.

McNamara has been at the top of ‘big wave’ surfing for over 25 years. He is the first big wave surfer to ride out tsunami waves created by calving glaciers, and the first person in his sport to be towed [dragged] into a wave by helicopter. At present, McNamara holds the Guinness World Record for riding out the biggest recorded wave in history, a 90-foot wave at Nazare, off the coast of Portugal.

The 49-year-old, who admits he is afraid of horses, says he found his calling in the ocean. In his new role as an Ambassador for Laureus Sport for Good, he aims to use the sport of surfing to help young people around the world overcome their own personal challenges.

In partnership with Laureus, McNamara and his team aim to visit more than 30 countries, introducing hundreds of underprivileged children to the beauty of surfing through free board giveaways and on-going instructional programmes. His mission will build towards the sport of surfing being involved in the 2020 Olympic Games in Tokyo for the first time in Olympic history.